We are in deep waters here. Discussion of Myra takes two forms.  I will call it Myraporn.   There is the lowbrow Myraporn which is exemplified by some paper which showed images of Myra over nearly forty years when her appearance changed and noted that the thing all the images had in common were her “evil eyes.”  The alternative is the highbrow Myraporn which involves sociology and psychology and criminal profiling and interviews with experts and pointless ruminations. I am interested in Myra because she is interesting.  Ian is interesting too, but less interesting.  So what possible excuse is there to include Myra Hindley in a study of Blackpool Crime?  Well the reasons are  slim but real.  Myra Hindley set out to write an autobiography.  She gave up because she was not able to truthfully describe her actions.  At least that is what I think.  The book was to be called: “One of your own.” As you can guess from the title Myra Hindley was seeking to express the idea that she was no different from any other girl born at her time in the North West of England.  Few images could express the idea more eloquently than the one below. 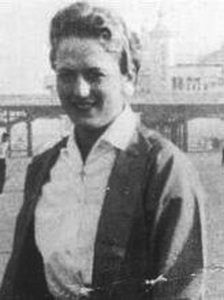 I digress.  My contention is that the combination of Myra’s masochism and Ian’s sadism made for an intense relationship and the paradox of this kind of relationship which is that the sadistic Ian is manipulated into meeting the requirements of the masochistic Myra. Ian Brady was fascinated by the Nazis and by the works of the Marquis de Sade.  Myra was said by friends to become more unfriendly and to dress more provocatively with short skirts and boots (it was around this time that the term “kinky boots” was in use) and to “talk posh.”  This was a time of great change.  Wages were  good and Myra and Ian could afford things that would have been unthinkable to Myra’s mother: wine, a motorcycle, a car, a camera, guns, a tape recorder. The old community of Gorton was cleared and Myra moved with her grandmother to 16 Wardle Brook, Hattersly, where she had a garden, a bathroom and indoor toilet and greater privacy.  Myra installed a cigarette vending machine.

What can be said.  We can go to other countries but the strangest things in the world are minds including our own…  walk down any street and you will pass things more exotic than Krakatoa erupting… you are more exotic yourself.